Yoga is a group of physical, mental, and spiritual practices or disciplines which originated in ancient India.  There is a broad variety of Yoga schools, practices, and goals in Hinduism, Buddhism, and Jainism. Among the most well-known types of yoga are hatha yoga and Rāja yoga.  At Enmei we practice hatha yoga.

Yoga is a fascinating field of study.  Its origins have been speculated to date back to pre-Vedic Indian traditions, it is mentioned in the Rigveda, but most likely developed around the sixth and fifth centuries BCE, in ancient India’s ascetic and śramaṇa movements. The chronology of earliest texts describing yoga-practices is unclear, varyingly credited to Hindu Upanishads and Buddhist Pāli Canon, probably of third century BCE or later. The Yoga Sutras of Patanjali date from the first half of the 1st millennium CE, but only gained prominence in the West in the 20th century. Hatha yoga texts emerged around the 11th century with origins in tantra. 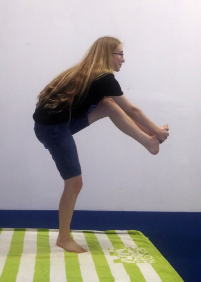 Yoga gurus from India later introduced yoga to the west, following the success of Swami Vivekananda in the late 19th and early 20th century. In the 1980s, yoga became popular as a system of physical exercise across the Western world. Yoga in Indian traditions, however, is more than physical exercise, it has a meditative and spiritual core. One of the six major orthodox schools of Hinduism is also called Yoga, which has its own epistemology and metaphysics, and is closely related to Hindu Samkhya philosophy.  While yoga was originally a religious endeavor, we do not practice it in that light.

to yoga appeal to different people.  Florida is hot enough already, and I do not like hot yoga, so we practice in an air conditioned room.  Yoga is about you, not about the teacher.  While I am glad to help people with techniques, I do not push people.  We do yoga at the pace and intensity that suits us individually.  In my opinion, yoga is a dialogue with your own body.  Some people can do extreme poses.  Some can not.  I encourage people to do what they are comfortable with.

We practice for about an hour, typically doing two sets of each pose, holding for 30 seconds for each pose.  We start with some warm up exercises tailored to the students’ problems, and then do some standing poses, followed by floor poses.  New students are encouraged to modify their pose to make it easy to do, working up to the full pose as they improve.  In particular, some of the balance poses may be difficult at first.  So may some of the stretches.

A typical sequence is given below, with the Indian names where I know them, and the probable benefits.  In general, yoga is great for improving flexibility, strength, and balance, with different poses exercising different parts of the body.